Back to Basics – Humanizing the Worker's Compensation System

The following is a presentation to the Montana Governor’s Labor Management Advisory Council on Workers’ Compensation, June, 2016. We have previously addressed the LMAC on topics including initial lost time payment period, Plan inconsistencies, subrogation, medical fee schedules and the efficacy of the overall system in Montana. This presentation was in lieu of participation in the claims processing panel. Unfortunately, my schedule had me in Georgia for the national meeting of the National Association of Independent Insurance Adjusters (“NAIIA”). http://www.naiia.com

Claims handling issues for discussion at the June meeting of the Montana Labor Management Advisory Council:

The claim handling issues addressed above are possibly caused by a combination of a complex and confusing WC system for the average person (meaning the perception of the injured worker on how the system is “supposed” to work) and the difficulties on the insurer side to balance service for the injured worker with proper staffing and resource levels. At the highest level, the Montana WC system has a primary goal of being self-administering, meaning that people should not have to retain an attorney to receive the benefits provided for in the WC quid pro quo, the big compromise. For the great majority of the claims made, I believe that the system works as designed and expected. At least in our experience, more than 97% of the 28,000 claims handled by Midland Claims Service, Inc and Industrial Injury Claims® have successfully concluded with the worker recovering to MMI and staying in or returning to their time of injury job without involvement of legal counsel. When reviewing the list of issues above, we are confident that at least in our business these types of issues are primarily confined to the less than 3%. There are a number of drivers outside of the WC that will likely remain or continue to escalate which have a direct impact upon the MT WC process. These include:

We in the WC claims industry have little if any ability to control these issues. As time passes, societal needs and expectations consistently change. That is natural and has been taking place for decades. In our operation since the late 1940’s, we do our best to honestly address these issues on a case by case basis. Every claim is different. Every injured worker is different. And a set of “best practices” will not now or ever remedy the essential differences that we face when administering WC claims. Passing legislation or burdensome governmental rules will not remedy these rare but ever-present issues. We simply embrace the concept that every claim, worker and situation is unique, something that is contrary to the “best practices” movement. We in fact have chosen to push back on the “best practices” movement in the WC claims industry, favoring a Back To The Future, person to person approach. Because we feel so strongly about this part of what we do, we applied for and were granted a federal registered trademark, “Redefining Best Practices®”.

When the majority of issues in the system are beyond our control, we think it is important to openly recognize these issues and honestly approach them…case by case…injured worker by injured worker. The one issue that we can control from the list above is the separation of the recovering worker from their claims examiner. As many of you have heard from me in past years, we credit our success in administering the system successfully, effectively and efficiently with our overarching philosophy: humanize the WC claims process. How does a claims organization “humanize” the process? Treat recovering workers as human beings, with respect and with timely communication. To address the physical separation, we extend an invitation to nearly every recovering worker to meet with our staff initially or at any time during the pendency of their claim. We have all heard the many stories of claims operations where the front doors are locked, or the examiners work simply in front of a computer in their homes. If any of us were injured, concerned about our healing and our future, worried about our job and our family and suffered an injury, how would the locked door or person working from a home office that is not allowed (by rule or by task assignment quotas) to meet with us? Separated. Alone. A key component to our examiner training is to pursue every option within our authority and control, and within the statutory framework laid out by the legislature, to make recovering workers feel as though they are THE KEY part of the recovery / claim team.

It has been well documented in the literature, recovering workers heal and recover faster and more completely when they are not worried about the claims process. This is a key component of Dr. Jennifer Christian’s 60 Summits advocacy for reduction of “needless work disability”. If the emotional energy of recovering workers can be directed primarily at their healing, they will tend to heal more quickly and completely. Conversely, if they perceive the process to be separate from their needs, or even contrary to their needs, much of their emotional energy will go towards trying to challenge the system to get it to work for them and NOT towards healing. While this may seem like common sense, much of the WC claims industry has eliminated the human component when handling claims in favor of “best practices” utilizing examiners behind locked doors or secluded in private residences. Our approach for the past 15 years has been different. We work as a claims team, in an office with an open door, claims professionals with a willingness to meet with recovering workers and/or their families at their convenience, and during business hours there is always a human being that answers the phone. We believe that this philosophical difference in approach has led to the 97% rate of claims that do not involve legal representatives, much more satisfied workers who have returned to their jobs and “got their life back” after an injury, and far lower overall costs than we see with other organizations in Montana. Below is a comparison of Lost Time / Indemnity claims between MCSi/Industrial injury Claims® and a leading writer of WC insurance in Montana. 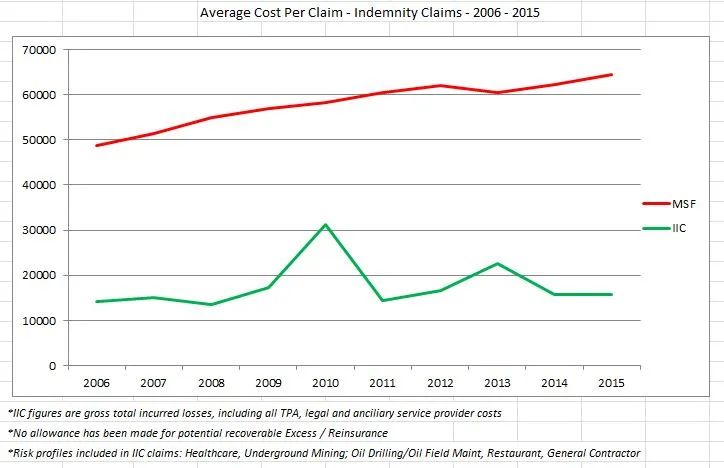 Humanizing the process does not in and of itself lead to these results. It takes a team of professionals that are engaged in the health, satisfaction and safety of those that they serve and work with. Results are a team effort. That is our approach at Midland Claims Service, Inc. and Industrial Injury Claims®. https://www.midlandclaims.com.

Spin off topics that could come up as part of the discussion:

Is there a complaint process available for injured workers?  Yes. With our organization, recovering workers can always take their questions / issues to the next level. And in the less than 3% of claims that satisfaction is not achieved, the Employment Relations Division has a standing, well-established mediation process that always available to workers. As the ERD will no doubt demonstrate, most issues that come before the ERD mediators result in successful resolution or settlement.

What is a legitimate complaint related to claims handling? Our approach is that all complaints from injured workers are legitimate. Legitimate in so far as the expectations of the recovering worker or other stakeholder give us an opportunity to identify the issue(s) and address it/them directly. We also view these times as opportunities for growth and education for our organization and staff. That being stated, many ‘complaints’ are simply issues of misalignment between expectations of the stakeholder and our performance to that point. Communication, forthright, honest communications where stakeholders are given berth to maintain their dignity is we believe a key to successful resolution of the issues that come up. From a state policy standpoint, trying to legislate a policy that defines what a “legitimate complaint” may be would be difficult at best.

Is there tracking of complaints? We believe that at the ERD level, inquiries and complaints are tracked. Mediations, the manifestation of “legitimate” complaints, are well documented.

Examiner certification. We were the organization that first brought the idea of WC Examiner certification to the industry in Montana more than a decade ago. At that time, and now, it is our belief that it is irresponsible as a state to allow those handling WC claims to do so without any certification and, more importantly, continuing education. These are individuals that are directly responsible for the recovering workers’ claims and helping them get their life back. Of any group of individuals, WC examiners should be the first to have the requirement of ongoing continuing education. Our initial presentation at the Big Sky Governor’s conference was for mandatory certification and continuing education (“CE”). There was push back on the mandatory component of the presentation, but fortunately the certification and CE process was passed and implemented by the Department of Labor – Employment Relations Division.

How many work comp examiners are handling claims in Montana? Unknown. We do not know if this information is available to the ERD. The number of WC examiners that are certified is readily available. But since the certification process is voluntary, the true number of examiners responsible for claims in the state is likely an elusive number.

What process exists to deal with bad claims handling practices? The short answer is yes. The first step is for the stakeholder to contact the ERD, with interventions up to and including mediation. Stakeholders are also free to employ the services of legal counsel to assist with their WC claim, and in some extreme cases ultimately district court litigation. This is a much more complex question that it may seem. There are three approved Plan types for the provision of workers’ compensation in Montana. These are Plan 1 (self-insured organizations), Plan 2 (insurance companies) and Plan 3 (Montana State Fund). Each Plan in Montana has differing oversight. Each Plan has differing obligations with respect to Unfair Claim Practices Act violations and common law ‘bad faith’. Further, the in-state adjuster law is generally followed, but claims handled for the Montana Insurance Guarantee Fund are by examiners located out of state. Essentially, workers always have the ability bring a District Court action alleging UTPA violations and / or bad faith conduct. The issue of significance here is that few “bad faith” claims are brought against one specific Plan. That Plan, while it openly competes for business in Montana, hires independent agents to obtain new business in competition with other Plans and until recently paid little in premium tax, is exempt from “bad faith” punitive damages. The playing field for injured workers is not level with respect to remedies for situations involving inappropriate claim handling practices.

Takeaway: The workers' compensation system in Montana is not broken, but has a number of systemic challenges that can be addressed to improve the system, competitive insurance landscape and amount and speed of delivery of benefits to legitimately injured workers.